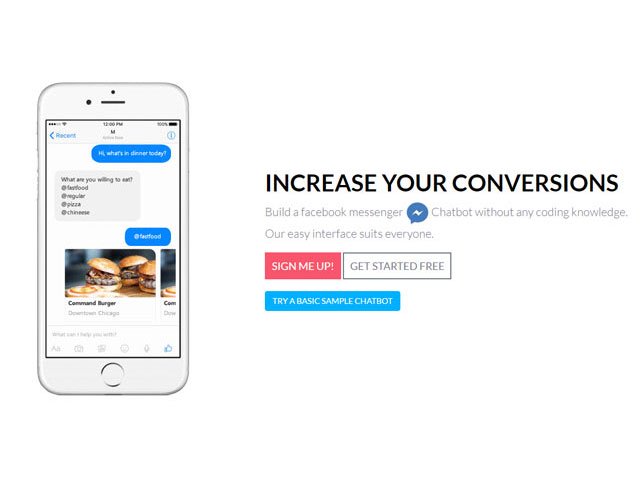 Ever since Mark Zuckerberg announced that Facebook was opening its Messenger platform to incorporate chatbots, analysts have wondered what the future of consumer-business interaction is like.

Some even said they were the new API.

It is too early to determine precisely what sort of place bots will eventually take in our lives. But if you’re running an online business, media business, or any sort of web platform and you’re not actively thinking about incorporating bots, you run the risk of falling behind.

This is the opportunity that Botsify wants to seize. The startup helps you create a Facebook bot without knowing how to code. Think of it as a Wix or Shopify equivalent for AI-powered chat.

“We focus on people who don’t know how to code, who don’t know anything about chatbots and who want to increase conversions to their business,” explains Usama Noman, co-founder of Botsify.

Usama says the bot creation process has been kept as easy as possible to make it easier for users from all walks of life.

The app lets you create as many bots as you want and is completely customizable, from greetings to commands.

The only prerequisite to start using Botsify is that you must have an existing Facebook page and the Facebook developer app.

The next step is to start building models and use cases. Botsify will help you program your bot to respond to certain commands. For example, you can train the bot to respond with “hello” every time a user says “hello”.

The bot is able to integrate unlimited functions. The algorithm can also include the derived keywords. For example, you do not need to enter separate responses for queries such as “Which computer” and “Which computer?” “.

There is also an option to have image-based chat bubbles, which is useful for people who run clothing stores and restaurants.

Botsify launched just 10 days after Facebook’s big announcement. Usama says they’re constantly tweaking the interface to make it easier and more user-friendly, so the user experience is likely to change. However, the vision of helping anyone create chatbots remains firmly anchored in the philosophy of the startup.

He adds that their main focus right now is growth with monetization coming at a later stage.

Since the startup is still fairly new, it would be premature to determine how well they are doing based on the growth numbers. But Usama says they are in talks with several large companies, including the music detection app Shazam, to create bots for them.

Future integrations include bots for WordPress, Medium, and Zendesk.

“When I first started learning how to create chatbots I ran into a lot of issues and realized that getting started was a very complex process for non-programmers. I want to help solve this problem for others, ”Osama exclaims.

This article originally appeared on Tech in Asia.

2016-06-23
Previous Post: PrioritEyes, Saltcoats’ contractor company, shortlisted for Team of the Year at the 2016 Vision Pioneer Awards
Next Post: The application of the student entrepreneur is based on the business of friendship